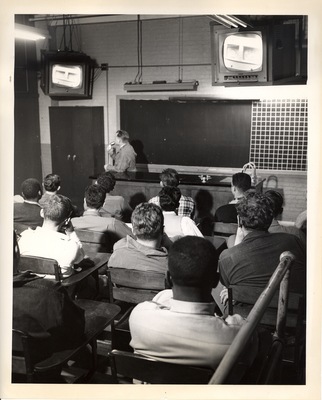 Students watch monitors that show a voltage meter being filmed in the Automotive Dept by department head William C. H. Meyer as part of a demonstration of a new technique in closed-circuit television. This is one of a series of photographs accompanying a press release about the development and demonstration of the new technique at the New York Trade School. Original caption reads, "In a classroom on another floor, students all have "front row" seats for the demonstration. Camera concentrates on close-up of a meter, where readings show the result of the voltage-regulator check. Instructor (standing at microphone) is Arthur Richards." Black and white photograph with accompanying caption.