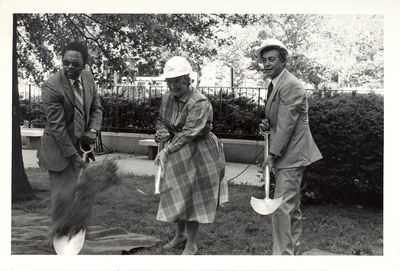 Ursula C. Schwerin is pictured with others at the groundbreaking ceremony for the Atrium Building in 1985. Ursula C. Schwerin, a former City Tech student, was president of the College from 1978-1988. She was the first woman to be president of a community college in the CUNY system along with the first woman to be president of a technical college in the U.S. Under Schwerin's tenure, the College made the transition from a two-year to a four-year senior college. and the school was thus renamed New York City Technical College.